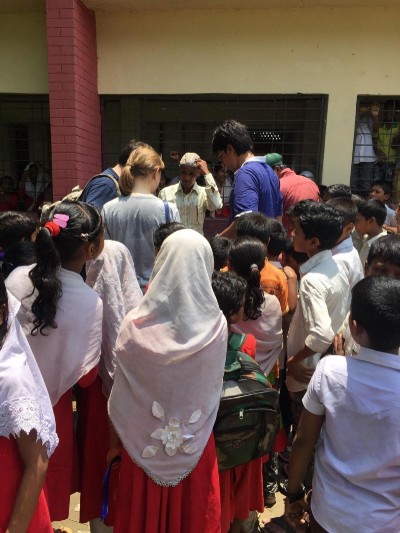 Water Technology Access Partnership (WTAP), a joint initiative between Imagine H2O Asia and The World Bank, kicked off its first project in Pakistan with Aquaffirm. They will collaborate with the Pakistan Council of Research in Water Resources (PCRWR) to validate their patented digital sensor for real-time arsenic testing across over 200 wells in Punjab province.

In the Haizaidi Union district, 20 miles east of Dhaka, the AquAffirm team found themselves surrounded by children — poking their heads into his work — intrigued by the lab work that had something to do with their water supply. What David Sarphie and his team were testing for was the harmful presence of arsenic.

Arsenic is well known as an “invisible problem” because it doesn’t change the taste or color of the water. This makes the danger hard to detect especially in regions where resources are hard to come by. Interestingly, the villagers in Haizaidi were well aware of toxins in their source water, making them even more curious as to how David was planning to solve the problem.

AquAffirm is an Imagine H2O Asia startup co-founded by David in the UK when he and his team developed a sensor to detect arsenic faster and at a lower price than existing solutions. This valuable device prompted the team to begin their journey tackling the problem faced by millions in not just Bangladesh, but across South and Southeast Asia. But David’s understanding of the problem really only came after the discovery of a peculiar enzyme.

In 1999, Joanne Santini, Professor of Microbiology at the University College London found a bacteria growing in an arsenic-rich rock. This was fascinating because the rock should not have supported any form of life with the amount of arsenic it contained, but the bacteria was thriving. Through her research, Jo was able to identify the metabolising enzyme and developed a method to produce it at a lab-scale. From there, she approached Professor Tony Cass — the co-inventor for the original glucose test strip now used by millions of diabetics around the world — and combined their expertise in enzyme electrochemistry.

Today, this work has been translated into the AquAffirm–As™ biosensor test.

AquAffirm’s biosensor is extremely accurate and can identify the presence of arsenic in just 3 minutes. This is a game changer with traditional tests taking upwards of 10–30 mins. Additionally, the sensor can connect to any smartphone — enabling not just portable and easy usage, but the ability to upload data online instantaneously. With this information, users can conduct real-time mapping and data analysis to identify contaminated versus non contaminated regions.

In Bangladesh, thousands die from arsenic poisoning every year. The WHO called it the largest mass poisoning in human history. Globally, 300 million people are still affected. And this issue is only getting worse in some regions. In India, estimates indicate that arsenic contamination has increased by 145% in the past five years. But this problem isn’t isolated to communities in South Asia — in the US, fracking and mining practices have put over 9 million people at risk of contamination. With millions of people worldwide still drawing water from untested wells, the scale of the challenge may be worse than we think.

International organizations and governments are increasingly recognizing the benefits of AquAffirm’s solution and discussions for large-scale trials are progressing. In the future, AquAffirm hopes to develop digital sensors and software to measure all sorts of water contaminants that have a debilitating impact on human health. Fluoride, a contaminant that cripples millions every year, is in the works.

David recalls how on the very last day of their field studies, a gentleman had travelled all the way down from the outskirts of the village — just to catch them in time and have his well tested. While COVID-19 has delayed the team’s ability to scale their deployment, David’s urgency to return to Bangladesh remains a testament to the direct impact his work can have on people’s daily lives.

Interested in being a part of the IH2O Asia Cohort 3? Learn more and apply today

Deploying for Impact — Someone who’s been there, done that

We all want “works better and costs less”. Not only is this hard to find, but often our organizations are structured to be distinctly unfriendly to new ways of doing things. We need to find a better way for customers to collaborate with technologists to develop lasting solutions to crucial water challenges. Utility leaders, water […]

Minhaj Chowdhury, Drinkwell CEO and Co-Founder, shares his journey deploying and scaling his water access solution across Chittagong, Bangladesh. Discover how he is expanding Drinkwell’s impact by collaborating with the World Bank and the Imagine H2O Urban Water Challenge. Original post: http://blogs.worldbank.org/water/building-smarter-water-partnerships Can smart philanthropy catalyze public-private partnerships that balance long-term financial sustainability with the […]

Lauren Guy, the founder and CTO of Utilis arrived in San Francisco for the Imagine H2O SF Week as a member of the 2017 Accelerator, and left as the winner of the 2017 IH2O Data Challenge. Utilis has gone from strength to strength, deploying with a number of IH2O Beta Partners and far outpacing projected […]