Winner of the MIT $100k and MassChallenge Diamond Award and included in Forbes’ 30 under 30 for Energy, Maher Damak is starting to make noise from his & his team’s base in Cambridge, MA. We sat down with the Co-Founder and CEO of Infinite Cooling to talk about how his research in underlying water-recovery technology with the Varanasi Research Group at MIT became an impactful solution for combating freshwater scarcity.

Tell us a little about yourself and what led you to found Infinite Cooling?

Mitigating water scarcity is a problem I am very passionate about. I did my PhD at MIT and I looked at new technologies to reduce water consumption. I worked on a new technology for efficient fog harvesting to produce water from both natural fog and industrial fog. After seeing the promising results and the potential scale this technology can have, my co-founders and I founded the company to take this from lab to market.

At what point did you decide to turn the tech into a business?

As we were developing the technology, we had many conversations with potential customers and we confirmed there was a strong need for our product. We also had a lot of mentoring and support at MIT from organizations like DeltaV, the Tata Center… We established a business plan that was backed with both technical results and customer interviews and decided to launch the business. We continue to have awesome support from Imagine H2O (obviously), MassChallenge and others. We’re pleased with how it’s been received by the market.

What problem do you solve for your customer?

We are on the path to an extreme freshwater shortage by 2030 and one of the US’s largest water withdrawal use is industrial cooling for power plants, refineries, factories and data centers, which account for over 39% of total US freshwater withdrawals. Cooling towers account for most of the water consumption of the power industry (~1 trillion gallons per year). For a single 600MW plant natural gas plant, water costs can be over $5M/year and are increasing by >5% annually.

To solve these problems, we developed a novel technology at MIT that uses electric fields to ionize the air, charge the escaping water leaving cooling towers and direct the water toward a mesh collector where it collects and flows toward a collection tank on the periphery. For a single 600MW power plant, we can recover 130 millions gallons for estimated savings of over $1M per year.

What is the impact in water you want to have with your technology?

By reducing industrial cooling water consumption, our solution will help the energy sector in sustainably meeting the ever-increasing energy demand. Our solution can reduce the impact of droughts in the US and other water-stressed parts of the world by limiting industry’s need for surface and groundwater reserves. This is also particularly crucial for developing countries such as India and China, where stress on surface and ground water is reaching drastic levels, yet energy demand is still increasing exponentially.

What is your larger vision for Infinite Cooling?

Beyond savings for plants, in regions facing drought and diminishing water resources, we can provide clean drinking water from industrial plant exhausts and be an alternative to expensive seawater desalination. This has the potential of offsetting 70% of the new desalination installations in the next decade saving $15B in energy costs. Taking Cape Town in South Africa as an example, they built an expensive desalination plant to mitigate their extreme water scarcity issues. 15 miles away from the city is a 2GW nuclear plant and Infinite Cooling could produce 3 times more water from that plant at 12% of the cost (including installation cost).

Sum up your IH2O experience so far in 3 words.

Check out what Maher and the team are doing at Infinite Cooling. You can contact Maher at mdamak@infinite-cooling.com. 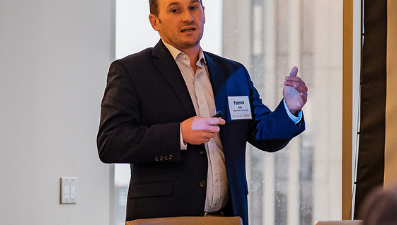 The wastewater space has long been one in which it is difficult to innovate. With large systems and long timelines, the industry has understandably been risk averse. That Island Water Technologies has had its amount of success despite innovating in such a space is a testament to its CEO and founder, Patrick Kiely. An innovator […]

Hear how three aerospace engineers are revolutionizing climate solutions in India From prolonged dry spells to devastating floods, cities around the world are increasingly facing climate whiplash. In 2019, Pune, an Indian city of more than five million residents, was hit by extreme droughts that left thousands without clean water. In 2020, flash floods rained […]

Company Update (Oct 29, 2020): VentureBeat: Arable raises $20 million to make connected devices for farmers Give us a brief overview of what Arable Labs is working on. Arable captures, aggregates and analyzes both historical and real-time data on crop and microclimate to reduce risk throughout the agricultural supply chain. We work with the most […]